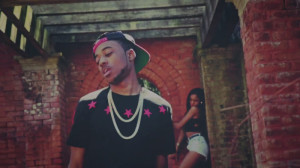 Velous has been making quite an impression lately. In a span of 2 months, the singer/rapper/producer has had his music video for “Ginuwine Article” added to rotation on MTV Jams, featured on one of the hottest records currently on national radio in DJ Spinking’s “Adult Swim”, he has been in the studio crafting hits with platinum producers Boi-1da and Vinylz, his label, Swanky Music Group, announced a joint venture with French Montana’s Coke Boys imprint and last but certainly not least, it has been revealed that Velous is the producer of Kanye West’s upcoming lead single “All Day”. Currently in the studio wrapping up his project and working with several of music’s A-listers,  Velous looks to be a fixture on your TV and radio.

Widely known for his writing and producing prowess, Velous takes a break from the boards and gives us his unique take on Eric Bellinger’s “I Don’t Want Her”. In the Exhibition Z directed clip, Velous displays a confident sense of exuberance as he showcases more of his R&B/Rap pedigree. His debut album which will be available for free download is slated for release very soon.